Selection Bias and the Fallacy of Listing Examples

Advocating a belief by finding supporting examples and listing them is fallacious because of selection bias; examples are selected because they illustrate the belief and contradictory cases are ignored. 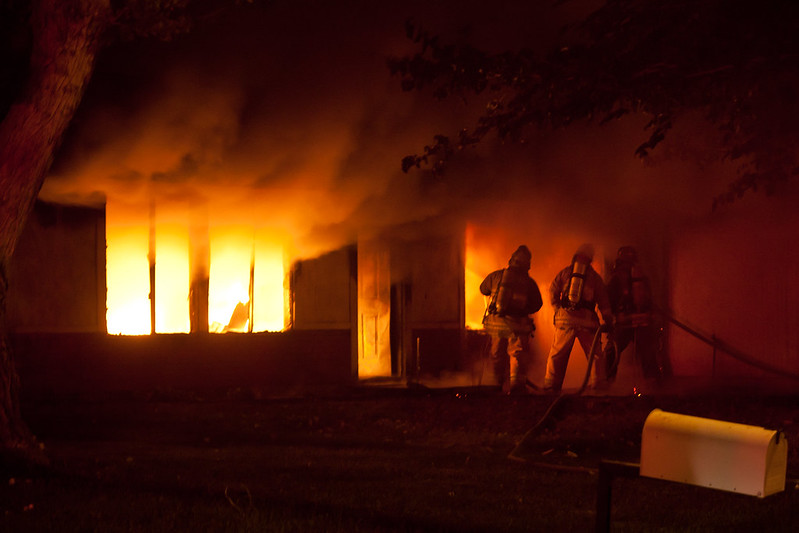 “House fire” by Ada Be is licensed under CC BY 2.0 and is not modified.

It might seem an obvious course of action to find and make a list of examples in which there was a fire in a home that had an Acme Electric Grill. Suppose that such an investigation results in a list of 100 such examples. Unfortunately, such a list proves absolutely nothing.

Why the Practice is a Fallacy

Table 1: A 2 by 2 contingency table with all of the information from the list of examples.

Suppose that the lack of information in the other 3 cells of Table 1 were addressed in the exact same manner, i.e., by finding a list of examples for each case, resulting in Table 2.

Table 2: A 2 by 2 contingency table with all cells filled in by the technique of listing examples.

Table 2 is still not informative. All that is known is that there are at least 100 instances of each case. Again, there is no way to check if the proportion of fires is greater among homes with an Acme Electric Grill than among homes without one.

It is not surprising that 100 instances of each of these cases could be found. For instance, in the United States in 2018, there were an estimated 379,600 residential fires. (National Fire Data Center 2020) Also, there were an estimated 138,516,439 homes in the United States. (US Census Bureau n.d.) Given a large enough population, 100 examples for each of the four cases can easily be found.

The fundamental issue causing these lists of examples to be uninformative is that sampling is being done, but the sampling is done with selection bias.

Sampling occurs when a smaller number of individuals are observed than the number of individuals in an entire population. This is a common practice. For instance, it is practically impossible to investigate all 138,516,439 homes in the United States and find out how many of them have Acme Electric Grills. Therefore, a smaller sample of homes is typically taken.

Inferential statistics is the academic discipline concerned with how to make conclusions about a population based on a sample from it. In order for statistical inference to work, the sample taken must be representative of the population. Representative samples used in statistical inference are often called “probability samples” because the inference is predicated on every individual in the population having a defined probability of being selected for the sample.2

Generally, selection bias occurs when the probability of selecting a sample from the population is different from what is believed to be the case. For a simple random sample, if the probabilities that some individuals are selected for the sample are greater than others, then selection bias has occurred.

Selection bias ruins the estimates made of properties of the population based on the sample. For instance, if what is believed to be a simple random sample of the entire United States is actually taken just from a region of the United States with twice the risk of fire as the national average, then around 0.634% of homes in the sample will have had a fire, while the true proportion of homes that had fires in the population is still 0.317%.

In the fallacy of listing examples, not only is there selection bias, there is nothing but selection bias, since examples are found specifically because they illustrate some phenomenon. Thus, all that is learned from making a list of examples is that one can find what one is looking for.

A trait of the fallacy of listing examples – and of many fallacies of interpreting evidence generally – is that such a practice can lead to any belief. Whenever a practice leads to any arbitrary belief, it is not useful for separating true belief from false belief.

For instance, there are approximately 7.7 billion people in the world. Thus, whatever is feasible to happen to a human being, has happened to many human beings by virtue of the sheer number of chances of occurring. Thus, the fallacy of listing examples can be used to conclude any arbitrary belief about human beings.

If one were to be persuaded by the fallacy of listing examples, then one should have numerous arbitrary beliefs, even contradictory ones or absurd ones. One should simultaneously believe that smoking does and does not cause pulmonary disease. One should believe that drinking a glass of water increases one’s risk of death.

Such arbitrariness is precisely why making a list of examples is fallacious.

Countermeasures to the Fallacy

If one wants to draw an actually informative conclusion when presented with a list of examples, the remedy is straightforward: one needs to define the population of interest and take a representative sample from the population.4 The list of examples itself is of no use and can be discarded.

For instance, in the Acme Electric Grill thought experiment, suppose that the population of interest is defined as all of the homes in the United States. The list of examples that led to Table 1 can be discarded. Instead of specifically looking for instances of fires in homes with Acme Electric Grills, some scheme is devised whereby a simple random sample of 10,000 homes in the United States is identified. Of these, all 10,000 are investigated as to whether they had fires in 2018 and whether or not they have Acme Electric Grills. The counts from this are summarized in Table 3.

Table 3: A 2 by 2 contingency table with counts of a sample random sample taken from homes in the United States.

It might be observed that counts in Table 3 are unrealistic, since as was seen earlier, the proportion of homes that actually had a fire in the United States in 2018 was quite small. A more realistic sample is represented by Table 4.

Table 4: A 2 by 2 contingency table with counts of a more plausible simple random sample taken from homes in the United States.

Because this is a thought experiment and Table 4 does not represent real observations, the sample used for the counts in Table 4 was generated by a computer program. The computer program was instructed that, in the population, the proportions of homes with an Acme Electric Grill that had fires is exactly the same as the proportion of homes without an Acme Electric Grill that had fires.

It is plausible that counts like those in Table 4 would be found in a representative sample from a population where the two proportions of interest are identical. To see this, statistical analysis must be done. This is, however, beyond the scope of this article.5

However, what makes the practice of listing examples fallacious applies in more complicated scenarios, as well. All such instances of creating lists of examples are fallacies because, in these instances, the examples are themselves selected because they illustrate some supposed phenomenon. It is this intentional selection bias that makes lists of examples uninformative and conclusions drawn from them fallacious.

Non-fallacious Use of Lists of Examples

While it is fallacious to attempt to infer a conclusion about a larger population from an unrepresentative sample, sometimes lists of examples can be used in ways that are not fallacious.

There is nothing fallacious about the use of examples for purely illustrative purposes, as long as there is no claim about the prevalence of the phenomenon being illustrated or about the supposed association of other phenomena with it. Indeed, this article uses an example, albeit a fictional one in the form of the Acme Electric Grill thought experiment, in order make discussion of the fallacy of listing examples more concrete, but makes no claim about how frequently this fallacy is occurs.

Furthermore, it is not fallacious for a list of examples to precipitate further investigation. For instance, a first sanity check in investigating whether Acme Electric Grills cause fires could be to find out whether any fires have occurred in homes with an Acme Electric Grill. Thus, lists of examples have a similar status to anecdotes in that, while no conclusion can be drawn from them directly, they can inspire more rigorous collection of empirical evidence.

Someone who is advocating a belief might think it an obvious course of action to accumulate a list of supporting examples. However, as has been seen, these lists of examples are nothing more than extended exercises in selection bias. Whenever such a list of examples is produced, no valid conclusion can be drawn. It thus behooves those who value the separation of truth from falsity to be on guard against this practice, both in others’ acts of attempted persuasion and in their own thinking.

The use of a 2 by 2 contingency table to illustrate bias in interpreting evidence was inspired by the section “The Excessive Impact of Confirmatory Information” in Chapter 3 of How We Know What Isn’t So. (Gilovich 1991)

For more discussion of sampling, selection bias, and how selection bias fits into the tradeoffs between sampling error versus nonsampling error, see Chapter 1 of Sampling: Design and Analysis, (Lohr 2021) which is available as a free “preview” download from the publisher.

My name is Joshua Born. I am a professional survey statistician and amateur social scientist. I would have liked to have been a professional scientist, but for many years I worked a previous career as a software developer, tried out different things, etc. etc., and life passed me by.

This blog is an outlet for me to explore my own interests in my personal time, including research interests. Most of my research interests pertain to contraception, alloparenting, and abortion. I also write about fallacies in how people think about social issues.