Study Enough Philosophy to Know Not to Study Philosophy

This is a preface to a series of articles on philosophical positions with which I disagree that explains the rationale for the series.

The rationale behind the “know not to study philosophy” part of the maxim is that academic-style philosophy is infamous for comprising treatises that consist of hundreds upon hundreds of pages of wasting everyone’s time. 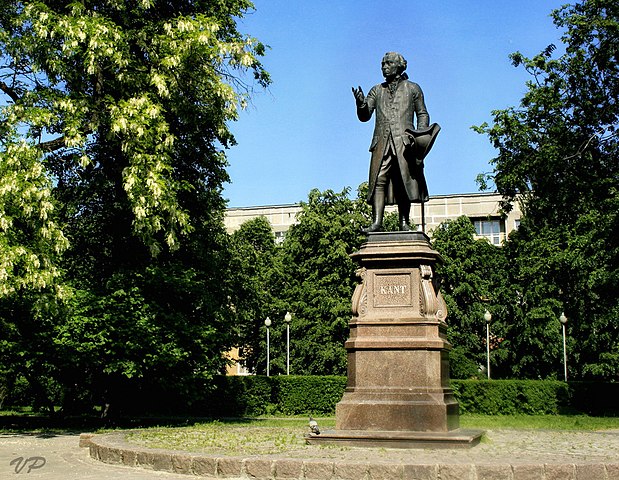 “Monument of Immanuel Kant” by Valdis Pilskalns is licensed under CC BY-NC-SA 2.0 and is not modified. Immanuel Kant was a German philosopher infamous for writing treatises that were more than eight hundred pages long.

Goal for Subsequent Series of Articles

The first is that many people are not consciously aware that they even have philosophical positions. This is akin to people who have never traveled the world and encountered other languages besides their native tongue. Such people are easy to spot because they find it incomprehensible that anyone would have a different way of thinking than they.

The second striking feature of disagreement across philosophical positions is that two people who disagree about something and have underlying differences in philosophical positions often cannot understand the disagreement itself. Such situations are akin to two people who speak only different languages: they cannot even understand what the other person is saying. If they did have a common language, they would likely still disagree, but at least they would be able to understand what they disagree about and how they disagree with each other.

The third striking feature is that the philosophical position someone has is independent of the specific opinion the individual has. A moral realist and a moral skeptic can wind up with the same view on capital punishment, or different views. Conversely, no matter someone’s view on capital punishment, the person could be a moral realist or a moral skeptic or have some different metaethical position entirely. Thus, differences in philosophical position cut across the familiar and simple-minded partisan boundaries that are conspicuous in social commentary.

This blog is an outlet for me to explore my own interests in my personal time, including research interests. Most of my research interests pertain to what I have termed "reproductive responsibility," which focuses on the study of contraception and occasionally touches on related topics.